Do you know your hair extensions? Do you know the differences between Virgin Hair, Remy Hair, basic 100% human hair? Well class is in session! I'm here to share some knowledge and ensure that you're not being duped, and paying exceedingly high prices for something that’s not worth it. In my next post, I'll give you a few tips on how to distinguish and test HH and it's quality, but for now this will be sufficient.

Over the past few years, with the increased popularity for human hair extensions I've noticed that hair extension wearers have been inundated with hair labelled as "virgin hair"  or "premium virgin hair" throughout local BSS and online hair stores. This is because many manufacturers are now marketing  "virgin" hair heavily to keep up with the demand for virgin human hair extensions. While there is nothing wrong with marketing and pushing a product because it's their right to; however, the problem arises when hair is falsely labelled to hoodwink the unassuming consumer. Unscrupulous manufacturers are purposely labelling hair as "virgin" and are often using the term very loosely on their products causing retailers to charge premium prices for hair that is far from premium, but indeed inferior, which as a result for the uninformed buyer, could be a hair extension nightmare full of frustrations, a feeling of being duped and ultimately a waste of their hard earned money.

So let's examine the above terms so that we can know better.

Virgin hair in its true sense is exactly what you would think virgin hair to be. Virgin hair is the creme de la creme of human hair extensions. It is 100% pure human hair that has had no chemical processing done to it, it has not been coloured/dyed or bleached, it has not been texturized, permed, blow dried, flat ironed, it has not been exposed to any chemical treatment that could be damaging during weft manufacturing. This hair is in its purest state which allows it to be/remain in its healthiest state.  It is sourced from a single donor in one clean cut of a ponytail which allows the cuticles to remain in the same direction. (note: cuticle is the outer part of the hair shaft that when put under a microscope looks like scales, it is ultimately what protects the hair).

Virgin hair is in its natural state, which is generally wavy, and or straight depending on the donor and origin.  This hair is the most expensive and will last an extremely long time with proper hair care.

Remy Hair is excellent quality 100% human hair.  While it is not the creme de la creme of human hair extensions like virgin hair is, it is still pretty high up there!  Much like the virgin hair, this hair is sourced from a single donor with its cuticles intact which aids in the prevention of tangling and matting issue due to the absence of the cuticles.  This hair is high quality and again will last you a very long time, well over a year, again, with proper care.  This hair's price point can be similarly priced like virgin hair depending on popular textures, yet you shouldn't be paying premium prices for it like for pure virgin hair.  However, what makes it different from pure virgin hair is that this hair has had some chemical process done to it.  And by chemical process I mean that the hair could potentially have been permed or steam treated to acquire a particular texture, like for example the ever so popular kinky curly, afro kinky, yaki texture, and deep wave ect., or it may have simply undergone a dying or bleaching process.  Remy hair extensions start out as 100% pure virgin hair, but  once it has undergone some type of chemical process during manufacturing, then it can no longer be called virgin hair and should not be sold as such.

Basic/Regular 100% human hair (low to medium quality human hair), while I know this could be confusing and disturbing for some, but the truth about basic/general 100% human hair is that this hair can be some of the worst. This hair is known as "floor hair" or "brush hair" because of where they've been sourced.  The cuticles of this type of manufactured hair are either unaligned and or damaged. With unaligned and damaged cuticles manufacturers then chemically strip the hair of the existing multidirectional cuticles with an acid bath, they then coats the hair with silicone in order to make the hair smooth, shiny and desirable to the consumer. However unbeknown to the unsuspecting consumer, after a few washes of the hair, the coating from the silicone is removed from the hair, leaving you with hair in a poor state - a batch of bad hair.  It is the disregard for alignment and chemical stripping of the cuticles that causes hair to snag against each other resulting in excessive tangling. Without its cuticles, this hair is brittle and sheds excessively, crawls at the nape, swells and mats. This hair is not recommended to be colour treated or heat-styled  which will shorten its life. This type of hair may last for a couple of months, (maybe 3-4 max before you quit it). Often at times for extremely low quality human hair, manufacturers mix in fibers/fillers and other synthetic materials to the hair to save on cost. This is the type of hair that you definitely want to avoid spending your hard earned cash on. It’s simply a waste of money, time and unnecessary frustrations. You will just want give up trying to work with a tangled mess daily and toss it in the bin. Some people with lots of patience do however, swear by using silicon mix treatments and giving the hair bleach baths to revive low quality human hair but ain't nobody got time for that! Sometimes this type of hair goes to a point of no return. Bye girl! 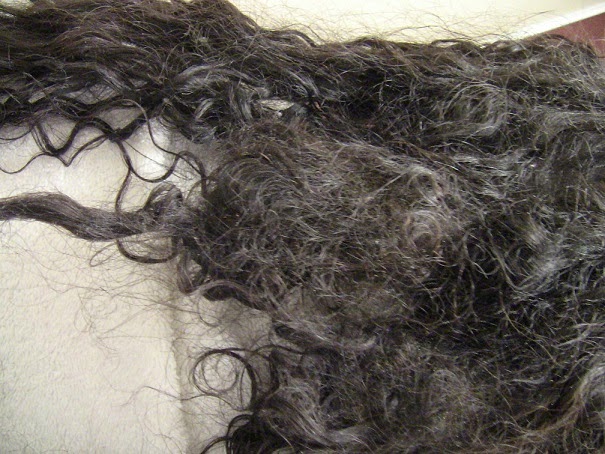 On a serious note though, sadly the human hair industry is an unregulated one, suppliers/manufacturers can label hair whatever they want, thus retailers charge the consumers based on the manufacturers' "truth".  It is important that you do your research when buying human hair, buy your hair from a reputable company that are open to answering questions about their hair as well as are willing to put themselves out there providing transparency, look for unbiased reviews from actual buying customers on their sites and seek out YouTube reviews by individuals that have actually purchased hair from the company.  By knowing a bit more on the basic differences between the hairs, you can attempt to make a more educated decisions when buying.

Later beauties!  And don't forget to look out for my next post, on tips on how to distinguish and test Human Hair and it's quality.